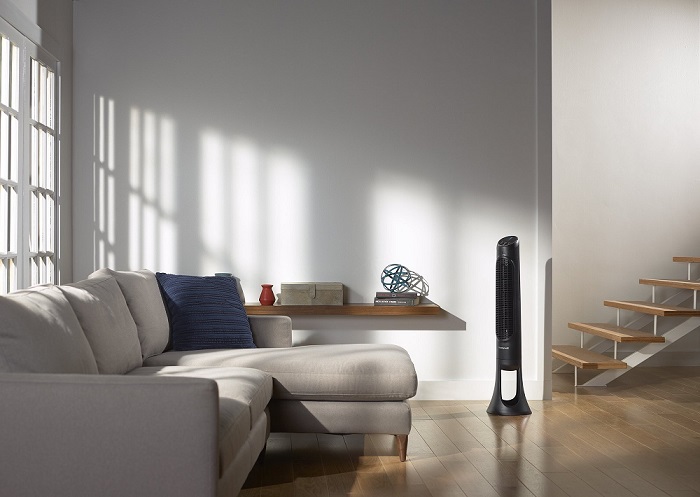 If you are wondering what are the best tower fans to buy? You’re at the right place.

No matter if you live in a city or more of a rural area, a house or an apartment, a luxury one, or a minimalist one, when summer comes you need to do something to withstand the unbearable heat.

Opening the windows at night, or never opening a window in no longer even an option, whereas air conditioners can cost you a fortune. That is why tower fans remain one of the primary choices to many in this regard. However, the one fan that would be perfect for you, especially if you do not want your fan to be very spotted, is a tower fan.

Today, tower fans come in every design and size. You may choose among lighter ones, if you will have to carry it around or heavier ones if you plan to settle it in one place without moving it from one spot to another.  Some of them can even be mounted to the floor.

Some people can easily decide what they need for their house, whereas others get stuck without having an idea what to do. Even when it comes to tower fans, these people are aware that they will be stuck with this tower fan for a longer time that is why they wish to purchase the best tower fan, though they are unsure how they will be doing that

If you have not owned a tower fan before, it is understandable to be a little bit confused. This is why we have created a list of the best tower fans and reviewed their features so you can pick the best one for you.

This tower fan by Kaz manufacturer comes in one of the two following colors: in black and pearl white, giving you the opportunity to choose the color that would fit in with the other furniture in your room.

It weighs only 8.3 pounds, what makes it especially practical to move from one room to another according to your needs.  It also has eight speeds instead of the standard three, what makes it one of the best tower fans to ever exist.

It is very quiet you can barely notice it is there, so you can use it even for your bedroom since it will not disturb you at all.

The fan comes with a remote making it possible for you to control its speed from the couch. One of its best features, is that the fan allows you to select a room temperature at which it will automatically turn on, and also a timer (up to eight hours) you can select in order for the fan to turn off after the amount of time you have set.

This gorgeous Lasko tower fan weighs 12 pounds and has 3 quiet speeds for customized air flow. It is very tall and thin and can be controlled by a remote, which contributes to you relaxation. Oscillation delivers air to different parts of a room so all your family members will be happy with it, no matter in which part of the room they sit.

Because of its height, it is perfect for bedrooms with high mattresses. It has a very quiet breeze so it won’t bother you while you sleep. It’s Ionizer which provides fresh air by spreading ions into the air and offering relief from some pollutants is a huge plus. Especially if you have any allergies or babies in the house.

It is also worth mentioning that you can choose between two colors: wood grain or silver, and match the fan to your room.

A tower fan with an unbeatable performance that weighs 12 pounds and has the capability to cool down the whole room. It comes with a remote included, which you can use to choose one of the 10 precise airflow settings. With no blades, it is very safe for kids and pets, and very easy to clean as well.

You can chose among one of the three colors:

At lower speeds it is so quiet that you forget it’s on. However, at the highest speed it is just a little bit louder. This is one of the prettiest and most attractive tower fans which would not only let you enjoy your room / workplace, but also would make the environment look nicer and more complete.

A tower fan that actually has three small fans that are independently controllable and also 3 fan speeds with up to 9 levels of airflow, so you can adjust their speed according to your needs.

It can be controlled with a remote control as well as with a touch sensitive LED control panel. The fan also includes a 7.5 hour timer that can be programmed in 30 minute increments, as very few fans do.

It is also one of the thinnest fans in the world with a fantastic elegant design that offers you the chance to choose among three colors:

This black tower fan comes with a remote control included, with which you can change its 3 speeds and also set the times from 1 to 12 hours, when you want it to shut down. It is perfect for people who like to sleep in cool, but wish they had someone to turn off their fan during the nights since, later on they feel cold. If you are one of these people, just set the timer after how many hours you want your fan to turn off and then go to sleep, since it will automatically turn off.

If by chance you lose your remote around the house, you can easily control the speeds and everything else since it has electronic LCD display.

Its air filters are washable, and since the fan in tall it is perfect for rooms with more people in it, or for bedrooms with high mattresses.

Advantages of having a tall tower fan

Maybe you have never thought about getting a tower fan, and you have no clue what the benefits and advantages of having a tower fan would be.  However, a tower fan would especially fit your needs if you have a small place with low ceilings. Since most of them are tall and narrow, they fit in every corner and are very easily carried around, even up and down the stairs. Some of the models have wheels or are adjustable so they can become taller.

Though pretty small, they are capable of moving a lot of air thus creating a chilly effect and making the summer heat not only bearable, but also making it possible for you to relax and chill.

These tower fans are also very economic, since with one of its kinds your electricity bill will be way lower than with an air conditioner.

What to look for in a tower fan?

A tower fan, just like every other type of fans has its features that one should check before purchasing. If you have never owned a tower fan, and you have no ideas what a good tower fan looks like, then this article will help you understand a thing or two about tower fans, which are the best tower fans and their features.

Do not just go online and purchase the first tower fan that comes up. Fans change a lot depending not only on their manufacturer but also in the material they were produced with. That is why, before purchasing a tower fan check for its:

Usually, goods fans have their remotes, so you can operate with them while sitting in the couch. They also have different speeds so you can adjust it according to your need. Some of the fans can automatically turn off so they save energy.